People often try and estimate things. For example, people at tech companies tend to run a lot of experiments in order to estimate the impact of various policies (e.g. new website layout) on important-ish things (e.g. user signup rate). The process generally works like this:

As it turns out, step 3 is actually not quite correct, and your estimate is in general not your best proxy for the true impact. I recently saw a presentation by Tom Cunningham and Dominic Coey from Facebook Research discussing their attempts at solving this problem. The intuition is straightforward but somewhat unintuitive (James-Stein), which leads to some interesting organizational challenges in practice. I’ll describe these things here.

It’s worth noting a few things:

Probably shrink your estimates (but not always)

On average, your parameter estimates are going to be over-biased because of noise. Consider this example: let \(\hat{\gamma}=\gamma+\epsilon\) with \(\gamma\) and \(\epsilon\) mean-\(0\) and independent. If you fit a linear regression of \(\gamma\) on \(\hat{\gamma}\) \begin{equation} \gamma = a+b\hat{\gamma} \end{equation} then the coefficients \(a,b\) will be just \begin{equation} a=\mathbb{E}[\gamma]=0, \quad b = \frac{cov(\gamma, \hat{\gamma})}{var(\hat{\gamma})} = \frac{var(\gamma)}{var(\gamma)+var(\epsilon)}<1 \end{equation} That is, if you restrict yourself to just applying some uniform scaling to your estimates, then the best adjustment (in a squared loss sense) is to shrink your estimate towards the mean. The noisier your estimate is, the more you should shrink it. Even though \(E[\hat{\gamma}\mid\gamma]=\gamma\), you should still shrink it.

We can go ahead and simulate this. We’ll assume all noise is Gaussian because that’s easy, though the above result doesn’t require any parametric assumptions. 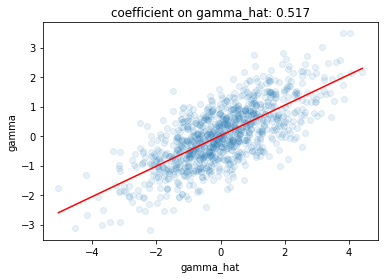 So, on average, you should probably shrink down your estimates. But there are clear situations where you should scale them up instead. Consider this example: 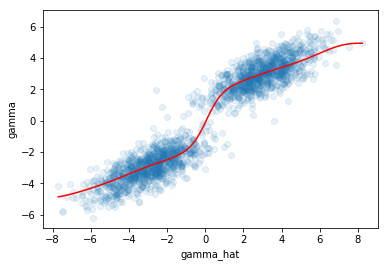 The slope of the local regression is quite high around 0, indicating that the estimates should be scaled up around 0, whereas further away from 0 the slope is lower.

What to do in practice?

Ok, so it seems like it might make sense to scale your parameter estimates up/down (mostly down). But how do you actually implement something like this in practice? If we could observe the true \(\gamma\) in addition to our estimates \(\hat{\gamma}\), then we could just try and estimate \(\mathbb{E}[\gamma\mid \hat{\gamma}]\) with some kind of regression like we did in the examples above. That’s too bad, because \(\gamma\) is clearly not observable, but the Facebook guys proposed a not unreasonable method for how to do this anyway:

Under the assumption that \(\epsilon_1\) and \(\epsilon_2\) are independent of each other and of \(\gamma\), then you have \begin{equation} \mathbb{E}[\hat{\gamma}_1\mid \hat{\gamma}_2] = \mathbb{E}[\gamma+\epsilon_1 \mid \gamma+\epsilon_2] = \mathbb{E}[\gamma\mid \hat{\gamma}_2] \end{equation} Which is exactly what we’re after. So if the errors are orthogonal then you can just do some regression to get the conditional expectation of one estimate on the other, which gives you the conditional expectation of the true parameter value given your estimate. For the most part, this makes a lot of sense. Some potential issues:

But of course, it’s not that simple…

In spite of the fairly clear reasons to not use your raw parameter estimate as a proxy for the true parameter value, this is literally what almost everyone does almost all the time. The fact that even for one of the largest and most sophisticated tech companies in the world, it’s literally the research group that is just now starting to figure out how to implement this should give you some indication of how widespread this practice is. Here are some potential reasons for why people use raw parameter estimates:

If you’re just one person doing some analyses, then you can maybe come up with something that does pretty ok for now. But when you’re in charge of designing a general process for how to adjust parameter estimates for a large institution, this problem becomes much harder. Here’s a speculative list of reasons:

These problems are probably not insurmountable, but they certainly aren’t trivial to solve on an institutional level. So maybe it’s not so surprising that almost every place just goes with just the straight up raw parameter estimates. They might not be great, but they’re easy, and often it’s better to be fast and ballpark than slow and exact.